Serbia lost to Italy on Saturday 2-3, diminishing all chances to qualify for the FIVB World League finals. Ivan Zaytsev and Aleksandar Atanasijevic were the top scorers. WorldofVolley brings you the latest volleyball news. 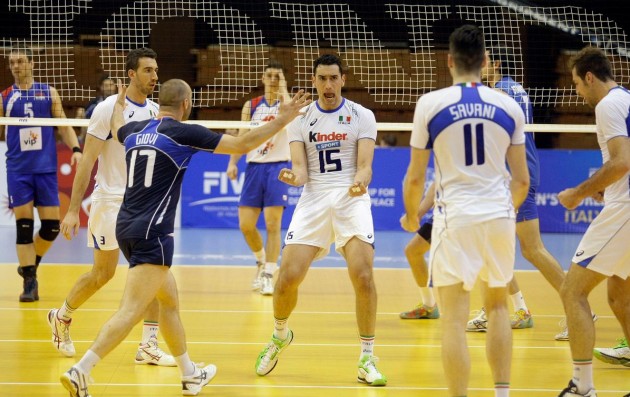 In the beginning of the first set, Serbia’s Aleksandar Atanasijevic blasted Italy with powerful serves to gain an 8-point advantage for the home side. After that, it was a matter of routine for Serbia to maintain the lead and wrap up the set. Serbia scored from every position, especially from the block and from counter attacks, and Italy was unable to match the inspired Serbian team. In the end, Kovacevic`s cleverly placed spike made it 25-20 and a set win for the hosts.

Italy started the second set better, taking an early 5-1 lead. Serbia’s coach Igor Kolakovic took a time-out, then Serbia tried to fight back, but Italy went to the first technical break with a comfortable 8-3 lead. Marko Podrascanin’s serves helped Serbia regain the momentum and reach the 2 points of deficit at 6-8. Italy’s lead was further reduced when the hosts got to just 1 point behind at 8-9. For some time Italy managed to maintain a small advantage but Serbia finally tied the score at 11-11, with Dragan Stankovic`s serve and a mistake from Travica connecting with Birarelli. At the second technical time-out the hosts completely turned the score in their favour (16-15). Italy fought back after the break going up 19-17 and forcing coach Kolakovic to ask for a time-out. Once again, Serbia reacted and reached the tie at 20-20. In a very tight finish of the set, Savani`s ace service for 24-22 proved to be decisive for the final 25-22 and 1-1 in sets.

In the third set, Serbia took the lead 4-1, but Italy reduced the gap before the first technical break and then tied at 8-8. Serbia managed to escape to 3 points of advantage at 13-10. The two points Serbia had at the second technical break (16-14) the hosts managed to preserve until the very end of the set. They even augmented the gap to four points at 21-17, and Italy could not recover from this. The home side deservedly went up 2-1 in sets (25-21).

The fourth set started with Italy taking an early 3-1 lead. However, Serbia managed to turn the score in their favour at 6-4 and coach Berutto had to call for a time-out. Still, Serbia preserved a 2-point lead thru the first technical break (8-6). After the pause, Italy turned the score completely in their favour at 11-10. Sasa Starovic came in instead of a little bit weary Atanasijevic, who carried the team on his shoulders over the past weekends, and who already scored 21 points up to that moment. Serbia’s Nikola Kovacevic assumed responsibility in these moments and with couple of points took Serbia in front once again at 14-13. The lead frequently changed in these moments, and it was Italy leading at the second technical break (16-15). When Italy scored one more point for 17-15, coach Kolakovic had to call for a time-out. However, Italy continued pushing hard and went up 18-15.

Serbia didn’t surrender and immediately got back into the game with two quick points for 17-18. Atanasijevic had to return and as soon as he stepped back into the court, he started scoring once again, keeping Serbia`s hopes alive with couple of great shots (19-20). Brothers Kovacevic helped Serbia tie the score at 21-21 in the following moments, as the older Nikola served a bomb and the younger Uros scored from counter attack. At 22-22 Italy’s Travica stepped up tricking Serbia’s defense, and Zaytsev slammed hard through the block for the set point at 24-22. Birarelli’s excellent block that followed made it 2-2 in sets, which meant that Serbia was officially out from the competition for the final tournament.

In the fifth deciding set, it was even before the technical break (8-7 to Italy). After changing sides Italy went 2 points up at 10-8, but Serbia immediately tied at 10-10 with an ace from Nikola Kovacevic. Coach Kolakovic introduced Milan Rasic in the finishing stage of the set, and it paid off as Rasic served couple of great serves, including an ace for 13-11 for the home team. However, after Birarelli blocked Uros Kovacevic, it was 14-14 on the scoreboard. Italy came first to the match point, but did not make the most of it. After an exciting finish, Italy finally wrapped it up at 19-17 to book a valuable 3-2 victory in Novi Sad.

Ivan Zaytsev of Italy topped the scorers’ chart with 29 points, while Aleksandar Atanasijevic of Serbia scored 25 for the losing team.