Even though on Saturday they lost 2:3 to Montenegro Czech Republic qualified for the final four of the 2013 CEV Volleyball European League – Men that is scheduled for next weekend in Marmaris, Turkey. Stewart Bernard's team topped Pool B. They join hosts Turkey and the winners of Pool A and C, Belgium and Croatia, for the last stage of the competition. Spain defeated Hungary in the other match. 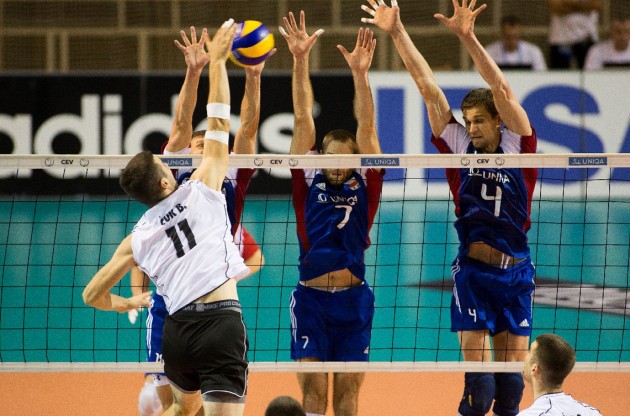 Montenegro started out very aggressive as the local fans contributed a great atmosphere in Opava sports hall; as his guys were trailing 5:11 head coach Stewart Bernard stopped the game but the young Czech players continued to make mistakes and hence paved the way for the final 13-21 in favor of Montenegro.

The hosts looked much more concentrated in the second set and broke away after the technical time-out going up 17:11 and finishing it off at 21-17.

The Czechs caught a great start also in the third set helped by the towering block of Tomas Siroky; up 12:6 the home heroes still had to cope with the furious comeback of their opponents who could make it 19-21 in the end to keep alive their chances to advance to the final four.

However, the Czechs regrouped in the fourth set and by seizing it could make sure their leadership in the group won’t be challenged anymore. Montenegro then dominated the scene in the tie-break (15-7) but still the Czechs were the ones who celebrated in the end.

“Even though the game turned out to be very difficult for us I am happy that my players fought until the end and with this result we could get our ticket to the final four” Stewart Bernard said. “We do not know yet who we will play in the semis but I am sure that the final four will be a very good and exciting tournament” he concluded.

“We fulfilled our goal and got one point from this game, so this is what really matters in the end” Czech captain Ondrej Boula said. “We were not that concentrated in the tie-break but this is not so important for today.”

“Our starting six includes five players who have no international experience so this is the reason why we started most of the sets so bad” explained Montenegro’s mentor Nikola Matijasevic. “Still our fighting spirit was one of our main assets today and our young setter played even better than Lukas Tichacek, so we could win this game.”

Hungary set the pace of the game for most of the second set before Spain changed gear to storm back and to claim the 22-20 that meant the provisional 2:0 in sets.

Spain lacked focus in the third set and this paved the way with gold for Hungary that could call for a fourth set. However, that was all as Spain got back control of the operations in the fourth set and cruised to a well-deserved victory.

“We lost as Spain did show a way of playing much better organized than ours. My team lacks experience as we just got back to the international arena and we need time to learn. My congratulations to Spain for their victory; now we’ll prepare for our last game” said Hungary’s head coach György Demeter.

“Spain played really good today and we could only take one set. We tried our best but it was not enough” said Hungary’s player Gabor Nacsa.

“Yesterday I was very disappointed after we lost to Montenegro but today we played really good in attack and that was the key to our success” commented Spain’s mentor Fernando Muñoz.

“The atmosphere here in Opava is just amazing. This is one of the best places where we have been playing this year and we look forward to tomorrow’s game against the hosts of the Czech Republic. We won’t prepare anything special; we just want to play our own game” concluded Spain team captain Sergio Noda.