Germany vs. Belgium is the final of the 2013 CEV Volleyball European League - Women. Giovanni Guidetti's team shut out Bulgaria by 3:0 in Saturday’s second semi final at the Palace of Culture and Sports in Varna to set up an all-rookie title clash on Sunday at 18:00 EET (17:00 CET). With this victory Germany also qualified for the 2014 FIVB World Grand Prix. Bulgaria will play against Romania for third place. Margareta Anna Kozuch and Elitsa Vasileva were the top scorers. 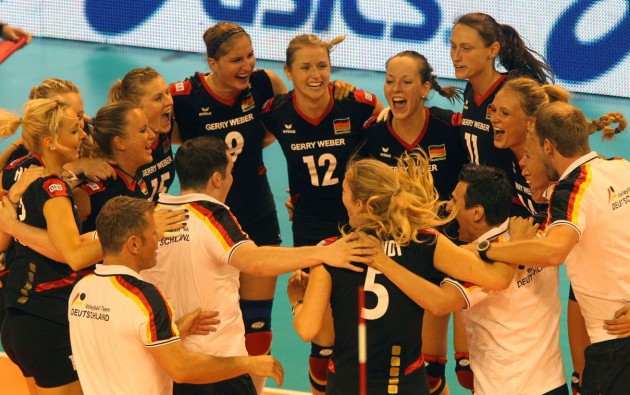 Germany was in control of the score pretty much throughout the first set. With more precision in its game and a couple of aces by setter Denise Hanke it was able to take the edge. Some good spiking efforts by Dobriana Rabadzhieva helped Bulgaria take a minimum lead after the technical time-out, but the home team could not hold on to it for long and Germany won the set by 21-17.

Hanke’s serving continued to give Bulgaria a lot of hard time in the following set as Germany broke away for an impressive 9-1 advantage. All coach Giovanni Guidetti’s players had to do now is keep their lead through the end of the set and they were able to do so with a great performance in offense and that kill block by Christiane Fürst that closed the set at 21-10.

Inspired by the cheering supporters on the stands, the home heroines tried to look for a comeback in the third set. They stepped up their spiking efforts and shot up to a 9-4 lead. But Germany had no intention to give up this set. Corina Ssuschke-Voigt and Maren Brinker became more and more consistent in offense while Margareta Anna Kozuch made her contribution from the serving line with 3 aces. Gradually the Germans were able to narrow the gap down and tie the score at 17-17. The set continued point for point until Heike Beier’s successful attack finished the match off at 21-19 and 3:0.

Margareta Anna Kozuch was the best scorer of the match with 14 points for Germany while Elitsa Vasileva was most prolific for Bulgaria with 10 points.

Strashimira Filipova, captain of Bulgaria: ”We were overexcited. We have spoken about this match throughout the whole week, but obviously we did not have enough power. Germany is not that much stronger than us, but unfortunately we played badly the whole match.”

Margareta Anna Kozuch, captain of Germany : ”I am happy that we won. We passed the last step, which was the most important one. Bulgaria worked really hard, especially in the last set. I am really glad that we all played this well. It was a really good game. Mostly I am very happy that we stayed focused as it was the key element for our victory.”

Marcello Abbondanza, head coach of Bulgaria: ”Germany played better in serving, passing and attacking. We are the stronger team, but we did not put pressure on Germany with our serves. I think we lost because of this.”

Giovanni Guidetti, head coach of Germany: ”I am very proud of my team. They stayed focused through the whole match and played very well. It was very important for us to win today so that we qualify for the World Grand Prix. I really want to congratulate the girls.  They showed they can play well and win in this important match.”