Germany is the winner of the 2013 CEV Volleyball European League – Women. The Germans defeated Belgium in this all-rookie duel by 3:2. The gold medals and the champion’s trophy were presented to head coach Giovanni Guidetti’s team by CEV President André Meyer and BFV President Dancho Lazarov. Both teams had already booked a ticket to the 2014 FIVB World Grand Prix by making it to the last stage of this year's European League. Anna Kozuch, Lise Van Hecke and Freya Aelbrecht were the top scorers. 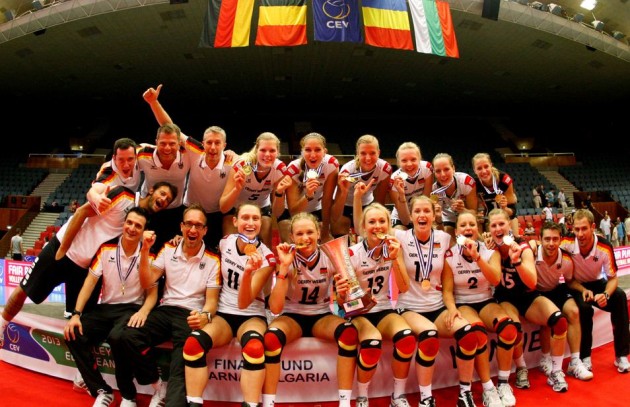 The battle was very even in the beginning of the first set, with frequent changes in the lead that never exceeded 2 points one way or the other through 13-13. From that point on, Belgium made an incredible 8-1 run to win the set thanks to improved serving performance and excellent blocking efforts by Freya Aelbrecht that led to the final 21-14.

For the most part of the second set Germany was in control of the scoreboard, but Belgium kept close behind and even leveled the score on several occasions. This went on through 16-15, after which the team of head coach Giovanni Guidetti, and especially Margareta Anna Kozuch, was more consistent in serving and attacking and broke away for the final 21-16 to tie the score at 1 set each.

The third set was dominated by the Belgians. The first time they went ahead in the score was at 4-3 and then they never looked back. With great performance by their block and fewer mistakes they widened the gap and finished the set off at 21-15.

Germany was the dominant force in the fourth set. With more precision in its game and a couple of aces by Denise Hanke it never allowed the opponent to catch up in the score and closed the set at 21-14 to set up a tie-breaker.

The German domination continued in the fifth set. Guidetti’s players stepped up their efforts in offense and quickly piled up an impressive lead to make a final run for 15-7 and for the gold.

German captain Margareta Anna Kozuch became the top scorer of the match with 20 points. Lise Van Hecke scored the most points for Belgium – 16, while Freya Aelbrecht impressed with 5 kill blocks.

Charlotte Leys, captain of Belgium: ”Before the game we knew it would be a tough one. Although we lost by 2:3 we fought for each and every ball in this game. Our serving was good and I am not ashamed as it is our first time in the finals. We won the second place and I am really grateful to the team. We can be very positive for next year. Congratulations to Germany!”

Margareta Anna Kozuch, captain of Germany: ”It was a match with a lot of fight. I am very happy that we won, because it has been a long way to this medal. And I am really satisfied with the result as this is the first gold medal for Germany in a very long period of time.”

Gert Vande Broek, head coach of Belgium: ”What a nice game! Both teams played really well. Everyone was prepared for a loss and we were not surprised. Anyway, today we showed that we fought for this place really hard and deserved it and it was close. This is the third time we play five sets against Germany in this competition, which proves that we really can stand for our place in the European League. Today, they showed better game and got the victory.”

Giovanni Guidetti, head coach of Germany: ”Congratulations to Belgium! They are a very difficult team to play against and it was a tough match. They played strong volleyball and today we won against one great team.”

WL M : Everything is ready in Mar del Plata