Belgium is the winner of the 2013 CEV Volleyball European League – Men. Dominique Baeyens’ team defeated Croatia 3:0 thereby getting the right to join the Intercontinental Qualification Round for the 2014 FIVB World League. Dominique Baeyens, Hendrick Tuerlinckx, Igor Simuncic and Tsimafei Zhukouski commented the game. 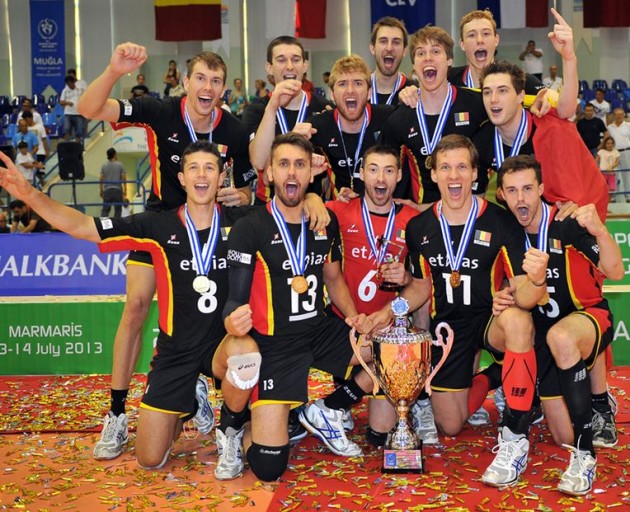 The domination of Belgium throughout the 2013 edition of the CEV Volleyball European League has been so sensational that the Red Dragons have reached the top spot of the podium after signing an extraordinary streak of 14 victories in 14 matches. No team has been able to beat the Belgians this year in the tournament.

In the final match, the exceptional distribution of setter Matthias Valkiers and the terrific blocking system of the Belgians, together with the effective spikes by MVP player, Bram Van Den Dries, got Dominique Baeyens’ men in the lead right from point 1. Croatia found a thousand and one problems to put the ball in the other side of the net and only the contribution by Ivan Raic maintained his team with options in the court. The attacks by the Croatian opposite, designated best scorer of the tournament, turned into the only means of scoring for his team. Nonetheless, the collective exhibition by Belgium soon ended Croatia’s illusion of victory.

In fact, the three sets followed a similar pattern. As soon as the Belgian combined efforts appeared on the court, the Croatians’ options of victory disappeared. Before the technical time-outs of each set arrived, the differences in the scoreboard favoring Belgium had turned into such a heavy stone on the shoulders of Croatia that Igor Simuncic’s men could do nothing but to wait for the unavoidable: Belgium’s victory.

With the fourteenth triumph in the competition, Belgium achieves its first title in CEV Volleyball European League and consummate a historic feat of finishing the tournament without a single defeat, an accomplishment carried out only once before, when The Netherlands signed a similar run in the 2006 edition. In 2013, Belgium repeats the sensational act and proclaims itself as the new CEV Volleyball European League title owners and confirms its condition of rising power in European Volleyball.

“It was a great game. My team played really good. They were excellent. I didn’t think that it was going to be that easy before we came here but we played much better than yesterday. Everybody showed a great performance and this is why we haven’t lost a set in two days. I’m really very proud of my team”, said Belgium head coach, Dominique Baeyens.

“This is an amazing feeling. This victory shows that our group is really a team. Everybody helps each other and our staff is helping us so much, that I feel really very happy for this gold medal”, pointed out Belgium captain, Hendrick Tuerlinckx.

Despite the defeat, the laments did not appear on the Croatian side. Having arrived to this edition of the tournament in substitution of Portugal and after brilliantly qualifying to the Final Four, the silver medal represents a joyous moment for Igor Simuncic’s men.

“The game today was very difficult for us, because of the tough match we had to play yesterday. So we knew that Belgium was such a powerful team that we wouldn’t have any options unless Belgium gave us any small chance; this never happened. We were under pressure through the whole match and we tried to keep a good atmosphere, a good spirit, waiting for our four minutes of hope, but they never came”, stated the Croatian head coach.

“Belgium played a very good game; we made too many mistakes, but what I want to say is that I am very proud of my team and my staff; this silver medal is golden shine for us”, pointed out the captain of Croatia, Tsimafei Zhukouski.