Brazil defeated the United States 3-0 on Sunday at Rio de Janeiro’s Maracanãzinho gymnasium, in their last match before the Finals in Mar del Plata, Argentina. Carson Clark and Wallace de Souza were the top scorers. 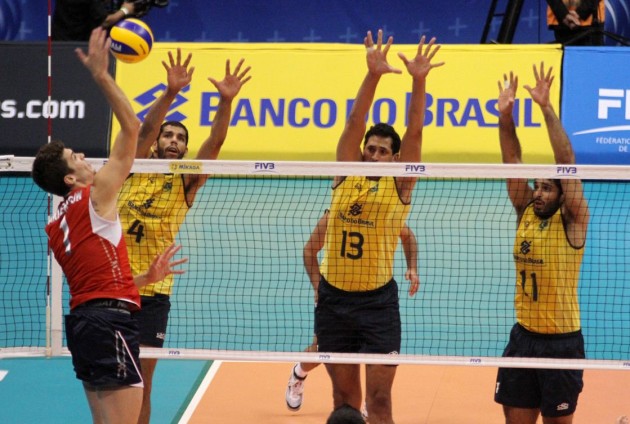 The match started close, but Brazil took a two-point lead (12-10) thanks to USA’s many errors. With an efficient attack, the home side kept the score advantage until the end of the set. Lipe Fonteles sealed the victory 25-21.

Thanks to good serving, USA jumped ahead 11-8 in the second set, but with a three-point streak on Lucas Saatkamp’s serve, Brazil tied the score 20-20. After a David Lee attack error, the home side won the set 26-24.

USA committed many errors in third set, trailing Brazil in the score (15-13). USA’s serve put the away side back in the match, but Brazilian reacted sealed the victory (25-23).

Brazil finished the FIVB World League’s Intercontinental Round at the lead of Pool A, with 25 points (nine wins and only one loss). USA was 5th in the group, with 12 points (four wins and six losses).

Brazil‘s first match in the final in Mar del Plata will be against the Russians, on Wednesday.