It took Czech Republic nine years to make a long awaited return to the podium of CEV European League – Men. The first title-holders in the history of the competition reached the Bronze medal in the 2013 edition of the tournament after beating Turkey 3:1 in the classification match ¾ held in Marmaris. Stewart Bernard, Ondrej Boula, Veljko Basic and Ulaş Kıyak commented the game. 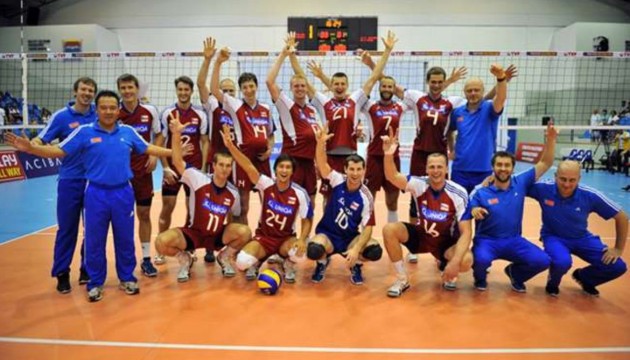 Despite the support and constant cheering from the fans that once again had packed Amiral Orhan Aydin Sports Hall, the local men were unable to keep their position in the tournament podium. The Turkish team tried to overcome the efficiency from the other side of the net through offensive actions lead by Emre Batur, as the opposite catalyzed the local attacks to keep Turkey in the fight for bronze. However, the Czech Republic, as stated by head coach Stewart Bernard in the previous days, had made the pledge to leave Marmaris adding another honor to its tally in the competition. And the Czechs achieved this goal by commending their performance to the effective distribution of Ondrej Boula, who allowed Michal Finger to find options for his powerful spikes. The attacks by the 201 cm opposite, together with the efficiency of the blocking system imposed by Stewart Bernard’s men, established during the first two sets a dominance in the game which Turkey could not answer.

After two periods strongly controlled by the Czech Republic, the locals’ reaction arrived. The chants and encouragements coming from the crowded stands propelled Turkey to star in a sensational comeback, enforced by the command of the game of Emre Batur and the collaboration in the scoring tasks by Burutay Subasi and Mustafa Koç. The Turkish men put a momentary spell in the Czechs’ authority in the third set and fought all the way throughout the fourth period, in search of the awaited tie-breaker. After being behind for most of the set, the Czechs managed to overcome the locals’ intentions by presenting a powerful blocking system that ended the Turkish dreams of victory. The definitive 21-16 sent the Czech Republic right to the third position in the podium.

“I am happy that we won the match; it is very important for us to finish with a victory”, said the head coach of the Czech Republic, Stewart Bernard; “Our players performed much better today than yesterday; we controlled the match and played at good level, especially in attack and serve. We wanted to reach the final but we managed to fight hard and get the win we looked for”, added.

“It is very good that we could finish with a victory; I think that we were a little bit lucky in the second set; it was difficult for us but Turkey had to take risks with the serve and finally we could achieve victory at the end”, said Czech captain Ondrej Boula.

The Turkish team lived with disappointment the moments after the match, since after the defeat in the hard-fought semifinal with Croatia on Saturday, the expectations of the squad was to be on the podium before the home crowd.

“It was really hard. We really wanted to win this match but we were not successful in the critical moments of the game. If we had managed to be better in the key moments of the second and last set of the match, the story would have been different. But it didn’t happen. Now we have to think about the European Championship”, said the head coach of Turkey, Veljko Basic.

“We didn’t produce a good start of the match because of the demotivation resulting from losing yesterday’s match. We tried to get better in the third set but we couldn’t succeed. The Czech Republic wanted to win this match more than us, and they won. Now we have to move on”, pointed out the captain of Turkey Ulaş Kıyak.