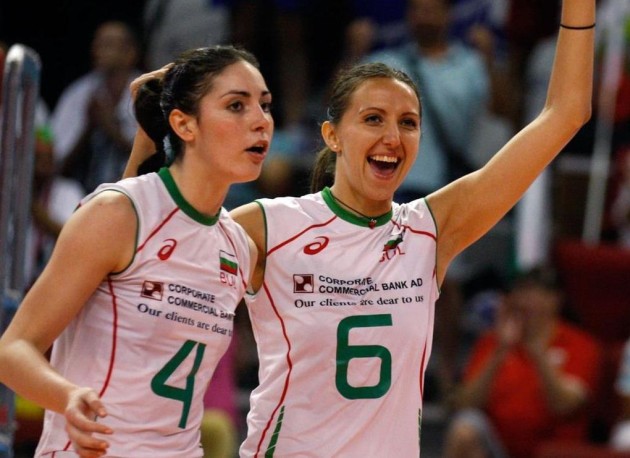 After an early Romanian lead Bulgaria’s Dobriana Rabadzhieva gave the opponents some hard time from the serving line to bring the score to 7-4. Romania increased the pressure to narrow the gap down and stay close behind the home team. It was even able to take a 1-point lead shortly after the technical time-out. However, after a 16-16 tie, Bulgaria took the next 5 points in a row with Tsvetelina Zarkova acing for the final point that closed the set at 21-16.

With some great serving from captain Diana-Ioana Calota, Romania took over the beginning of the second set as well, but only for a short period. Seven consecutive points with Bulgaria’s captain Strashimira Filipova serving brought the score from 0-3 to 7-3 and gave her team the edge. To head coach Marian Constantin’s team this was a blow it never recovered from. The home team dominated through the rest of the set with setter Lora Kitipova making good use of the middle attackers. Zarkova was once again responsible for the closing point of the set as she put the ball down for the final 21-14.

Bulgaria started the third set with a 6-0 run that pretty much pre-determined the outcome of this match. The team of head coach Marcello Abbondanza completely outplayed its opponents in all aspects of the game and logically dominated through the end. The two middle blockers continued to play the leading role in the Bulgarian team, but it was outside hitter Elitsa Vasileva who squeezed the ball besides the Romanian block to shape up the final 21-14.

Tsvetelina Zarkova was the best scorer of the match with 15 points for Bulgaria, including 5 kill blocks. Diana-Ioana Calota and Nneka Obiamaka Onyejekwe were most prolific for Romania with 8 points each.

Diana-Ioana Calota, captain of Romania: ”The result from today was expected from everyone in the team. The Bulgarian team had already beaten us before and played better than us again. We hope that next year we are able to beat them.”

Strashimira Filipova, captain of Bulgaria: ”Today we made a lot fewer mistakes and logically performed better. We partially made amends by winning the bronze medal, but that does not make up for our poor play in the semi finals.”

Marian Constantin, head coach of Romania: ”The outcome of this match was very bad for us. We did not have any luck this time and the Bulgarian team was able to beat us again. Next year we will do better.”

Marcello Abbondanza, head coach of Bulgaria: ”We performed better today. The girls showed what they are capable of and won the bronze medals. I think that we will show the true strength of our team in the upcoming FIVB World Grand Prix.”

WCC W: One for the books occurred...