Nicole Fawcett led USA to 3-2 victory over Japan in the final match of the USA Volleyball Cup in front of 2,000 fans at the JSerra Catholic High School on Saturday. Nicole Fawcett, Lauren Paolini, Kim Hill, Yukiko Ebata, Saori Kimura and Risa Shinnabe were the top scorers. 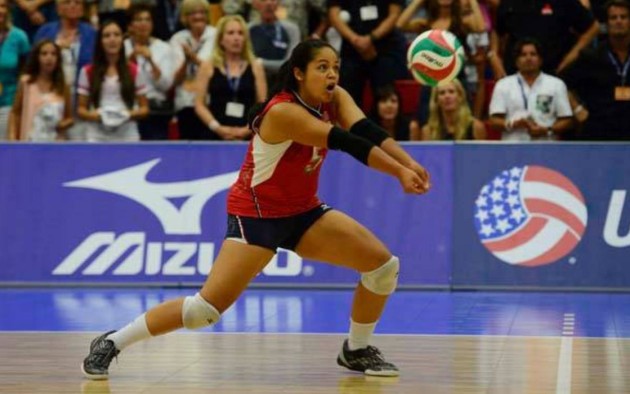 Fawcett tallied 18 spikes on 33 attacks with just two errors to go with three blocks and three aces as part of her 24 points. Lauren Paolini added 14 points while Kim Hill chipped in 13 points for the USA team. Japan was led by Yukiko Ebata’s 24 points, while Saori Kimura added 23 points. Risa Shinnabe charted 13 points in the loss for Japan.

“Japan is definitely an unbelievable team and one of the toughest to score against in the world, and they showed that tonight in how they came back,” said setter Jenna Hagglund, who tallied 47 assists in the USA victory. “Japan is one of the best teams in the world, and this has been a great experience for the whole team with so many players contributing. It is incredible to have so many players play and make solid contributions versus a great opponent such as Japan.”

USA bolted to a 13-2 advantage in the opening set and went on to win 25-15 as Fawcett connected for five kills on seven errorless attacks along with a block. Japan held an 8-6 lead at the first technical timeout of the second set, only to see USA gain steam in building a 19-12 lead and going on to a 25-19 victory.

Japan reached the third set’s first technical timeout leading 8-6 and increased the margin to 16-13 at the second technical timeout on a 4-1 scoring run. Team USA answered by leveling the score at 18-all. Japan regained a two-point cushion at 21-19 and went on to win 25-21 on a 7-3 run.

Japan prompted USA to take a timeout trailing 13-8 in the fourth set after yielding a 6-1 scoring run by the visitors. Hill put up a solo block and Fawcett sliced an ace to close the USA deficit to 22-21 going into Japan’s second timeout, then the score went level at 22-all on a Japan attack error. Japan scored the final two points on a block and kill to capture a 25-23 victory and send the match into the tiebreaker.

USA jumped out to a 4-1 lead in the fourth set that included two slams by Fawcett, resulting in an early Japan timeout. Japan rallied to square the set at 6-all. Hill finished off the set with a kill down the line at 15-10.

Both teams will be competing in the FIVB World Grand Prix, the premier annual women’s international volleyball tournament, starting on August 2. The Americans travel to Brazil for the opening preliminary weekend to face Russia, Poland and Brazil, while Japan competes in Turkey against the host country, Thailand and Algeria.

The World Grand Prix has three consecutive preliminary weekends with a total of nine matches. The top five teams in the 20-team field plus Japan advance to the Final Round that takes place August 28 to September 1 in Sapporo, Japan.

ITA W: Mollers discovers Novara – The group is our strength