WL M: Three medalists from 2012 came up short this year

Poland, followed by the USA and Cuba – that was the final result of the 2012 World League. One year later and all three of the top teams have already crashed out in the preliminary round of the competition. 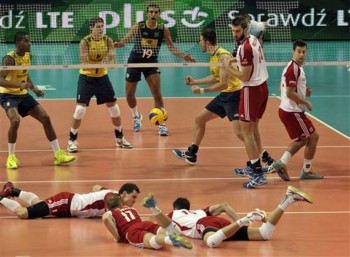 Poland had a bad record this year

Last year’s finalists Poland and the USA could do no better than finish fourth and fifth out of the six teams in Pool A. Cuba finished a distant last in Pool B, winning just one of ten matches.

Poland made history last year with its World League title but despite having almost exactly the same squad as 12 months ago, including top spiker Bartosz Kurek, this year’s campaign was nothing to write home about.

The ten preliminary matches produced just four wins – exactly the same record as the USA. The Americans, however, were at least able to point to the absence of a number of stars, including Clayton Stanley, and having a new coach at the helm in John Speraw.

Record World League winners Brazil, were once again the outstanding team in the preliminary round.  The Brazilians suffered just one defeat in their ten matches – at home against the rejuvenated French.

Having finished sixth last year – their worst ever result in the World League – the South Americans will start the Final Round from July 17 to 21 in Mar del Plata as favourites.