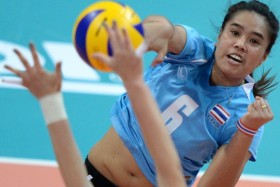 Thailand quickly gained momentum in the first set. It was 7-1 and 8-2 at the first technical time-out. It was already clear that Poland lost the first round, because Thailand held the advantage until the end.

Polish women started the second set much better. They led 3-0, but dropped the advantage up to the first technical time-out when it was 8-7 to Thailand.

For a little more time it was played point for a point, and then the girls from Asia gained the first major difference (13-10). With the 8-3 rally they enlarged it to 21-16 and the second set was gone for Polish.

The first half of the third set was similar to the second, although Thailand had a chance to set off from Poland at 11-9. Polish women did not permitted it, so after leading 15-13 with a 5-1 rally they resolved this set in their favor.

The fourth set was a repeat of the first. Thailand has imposed their rhythm from the start, taking the great lead 7-1. Most that Europeans have managed to do is to come closer (19-15), but it was followed by the Thai women 3-0 mini-rally of, enough for the bronze.

Most efficient in the Thailand was Onuma Sittirak with 23 points, while in Poland Anna Grejman scored 16.