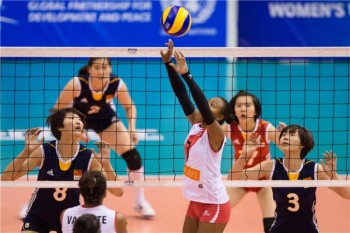 Peru started the match with a highly spirited performance aided by their emotional spectators using their drums and peeps to encourage their players. They led continuously in the first and second sets with the sharp hits sent by their strong opposite Angela Leyva and the proper defence helping more pressure upon the Chinese.

The skilful setter Shiamara Almeida added to the power of her team through the combinations aiming at deceiving the tall Chinese blockers specially the competition best scorer Xinyue Yuan. She also used her spike services to score a lot of aces.

China came back in the third set as usual when they used the strong service to put a pressure upon the Peruvian team and succeeded to lead several times until they won the set 25-20.

In the fourth set the middle blocker Xinyue Yuan started to do her job through the quick attacks from positions 3 as she scored a lot points to gain the fourth set 25-19.

In the tiebreak china had early lead 6-4 before the Peruvian team turn the court at 8-7 and they continued till 14-11 when they missed three match points till China draw 14-14 in the match biggest drama. Again Peru lost another six match points, but the Chinese were willing to do it after an extraordinary challenge to win 23-21.

To read more articles from this competition click on Youth World Champioship 2013 W.