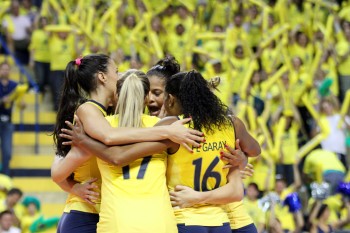 Russia showed his attack power to jump ahead 8-7 on the first set. Brazil had difficult to face the opponent’s block, but got back to the match thanks to Russia’s errors (15-14). However, the away side increased its attack efficiency to won 28-26.

Russians maintained the pace on the second set, opening 8-5. An improved block gave Brazil the lead on the score (14-13). The set kept close, with both teams alternating in the lead. After an Adenizia Silva’s block, Brazil won the set 26-24.

Both attacks started the third set with a great performance. After an impressive sequence of Adenizia Silva on the serve, Brazil opened a six-point lead (15-9). The home side managed its advantage on the score to win 25-19.

Russia committed many errors in the beginning of fourth set, but kept the lead on the score (16-15) thanks to its powerful attack. Led by the great performance of both spiker Tatiana Kosheleva and opposite hitter Nataliya Goncharova, the away side won the set  25-22.

On the tie-break, Brazil took a three-point lead and managed the advantage until the end of the set, winning by 15-8.

Russian opposite hitter Nataliya Goncharova was the best scorer of the match with 25 points. Spiker Fernanda Garay topped the score for Brazil with 22 points.

USA W: Klineman – “I’m playing in Italy, ‘cause there is no professional volleyball in USA”