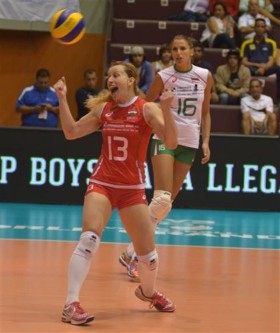 Bulgaria started the first set with some defensive issues that allowed Brazil to lead 8-5 at the first technical time out. A block and spike from Bulgarian captain Strashimira Filipova helped tie the scores at 9-9, after which it was a battle for supremacy. The underdogs prevailed when Emiliya Nikolova clinched the set with an amazing block on Sheilla Castro.

The second set continued with intense plays from both teams until a surprise attack from setter Lora Kitipova gave Bulgaria a one-point advantage at the second TTO. A “bomb” from Rabadzhieva sealed the second set and Bulgaria were 2-0 up.

Brazil turned the tables in the third set after improving their block and spikes and were three points up at the second TTO. Brazil’s Priscila Daroit led the way as South Americans took the set 25-20.

Thaisa Menezes came off the bench for the fourth set as Brazil tried to keep up the momentum of the third set, but Bulgaria controlled their reception well to hold on for a historic victory.

Fernanda Rodrigues of Brazil was the top scorer in the match with 18 points while Bulgarians were led by Dobriana Rabadzhieva with 16 points. Bulgaria had the advantage in blocking points (14-12) while the Brazilians outserved their opponents 7-4.

For more news from this country, click on World Grand Prix 2013.

See the profiles of Bulgarian and Brazilian national team.