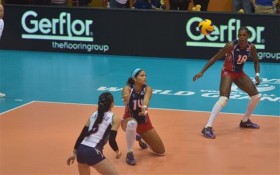 It was the second time in a week that the two teams had met. The Dominican Republic also won 3-0 last week on home soil.

The result raised the Dominicans’ record in the World Grand Prix to 3-2 for nine points, while Puerto Rico suffered their fifth straight loss and remain without a point.

The first set saw a very defensive Puerto Rico. Dominican Republic had a two-point advantage at the second technical time out. Consecutive errors from Puerto Rico allowed their opponents to finish off the set 25-22.

The Dominicans showed their serving power in the second set but the Puerto Rican duo of Ocasio and captain Yarimar Rosa helped tie the scores at 18. Puerto Rico turned up the heat and moved into a 23-20 lead, but the Dominican Republic brought in setter Niverka Marte to change the game flow. Errors from the hosts allowed the Dominicans to overturn the lead and take the set 25-23.

Dominican Republic moved two points ahead at the second TTO. They kept the advantage and took the third set 25-20.

Bethania De la Cruz of the Dominican Republic was the highest scorer in the match with 18 points, while teammate Annerys Vargas scored 11, including eight blocks. Puerto Rico’s Karina Ocasio and Lynda Morales each scored nine points.

For more photos, see the gallery below.

See the WoV Community profiles of the Dominican Republic and Puerto Rico.