The fans of Belgium’s multiple champions Noliko Maaseik will have to get familiar with a totally re-styled team for the start of the coming season after seven players left the club that is once more set to compete in the CEV Volleyball Champions League. 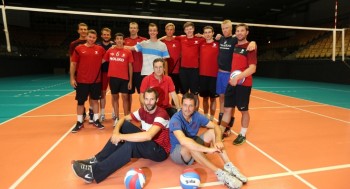 After announcing the arrival of Italian-born head coach Vincenzo Di Pinto, Noliko just finalized the transfer of six players and has also signed an assistant coach to support Di Pinto.

“The past season was not that successful for us” says Organization Director Dieter Leenders, “and the contracts we had with most of our players and our former head coach did all come to an end. So we decided that this was a good opportunity to re-style the group”.

Vincenzo Di Pinto who found his way to Maaseik a couple of weeks ago will be assisted by Noliko former middle-blocker Jo Van Decraen who is returning home after retiring from the sport at the end of the past season.

Matias Raymaekers is also back in Maaseik after playing there from 2002 to 2005 before he moved abroad and played with some of the best European teams, including Italy’s Lube Banca Marche Macerata and Russia’s Lokomotiv Novosibirsk.

“We are currently looking for two more players to complete our roster and we hope for a very successful season” concludes Dieter Leenders.

EXCLUSIVE for WoV: Harmotto – “I`m excited to be part of Eczacibasi family”