International volleyball returns to the northern Japanese city of Sendai this weekend, the final three days of qualifying in the FIVB World Grand Prix. Japan will play host to USA, Bulgaria and the Czech Republic at Sendai City Gymnasium. 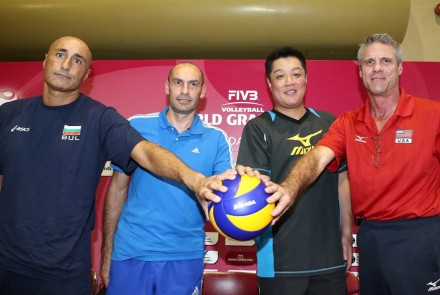 Japan will play host to USA, Bulgaria and the Czech Republic at Sendai City Gymnasium and Control Committee President Shanrit Wongprasert welcomed the teams and officials at Thursday’s team briefing.

With Japan hosting the Finals in Sapporo at the end of the month, all eyes will be on who will qualify for the other five places available.

Of the teams in Pool M in Sendai, USA and Bulgaria still have a good chance of qualifying, while the Czech Republic are further down the standings.

Japan tops all their rivals in Pool M with a 6-0 record and are level with China on 17 points at the top of the standings, but coach Masayoshi Manabe is not underestimating his team’s chances this weekend. “In our games in Turkey and Poland, the players were able to do their best, especially the younger players,” he said. “However, here the other teams are strong and powerful – more powerful than Japan, so it’s going to be hard to win. We want to save our best for Sapporo.”

Bulgarian coach Marcello Abbondanza said his team is still hoping to get to the Finals: “I’m proud and happy that my team has played good volleyball in the last two rounds and got good results, which gives us more chance to try and get, unbelievably, to the Finals. In these three matches, we want to try and do our best to keep with this target.”

Karch Kiraly coach of defending champions USA said he was happy for his team to get to play the world’s best: “We think it’s fantastic for the development of this young team to get to play as strong a competition as possible and we got a lot of that in the first two weekends and expect another strong group this weekend. We’re excited to be here and be part of this very competitive group of four teams.”

Carlo Parisi, coach of the Czech Republic, who are also making their World Grand Prix debut this year, was also pleased with his team’s performance so far: “We’re happy to be here and we feel positive about the first two rounds in the Dominican Republic and Hong Kong because we played good teams and saw the development of the team. In Sendai, too, we will be playing against strong teams so I’m curious to see how our team performs against these very tough teams. The World Grand Prix is good experience for all the team.”