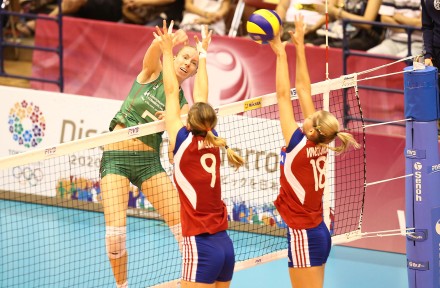 Dobriana Rabadzhieva on the attack against the Czech Republic on Saturday

The Czechs took an early lead and held on to it. They were two points ahead at the first technical timeout and six in front at the second, but Bulgaria were still dangerous enough to merit two Czech timeouts – the first when Bulgaria scored three straight points to close to 15-19 and the second when the Czech allowed two straight serves from Mariya Karakasheva to go through them. But decent hits by Kossanyiova and Havlickova brought up setpoint, and a service ace by Ivana Pichotova put the Czechs 1-0 up.

Bulgaria looked sharper at the start of the second set and got a couple of good blocks from Hristina Ruseva as they moved 9-6 ahead. After Bulgarian coach Marcello Abbondanza called a timeout, Bulgaria stretched their lead to six points after successive kills by Filipova, Elitsa Vasileva and Ruseva. Vasileva brought up setpoint at 24-18 and a wide effort by Havlickova evened the set score at 1-1.

The upshot of the third set was that Bulgaria moved into a six-point lead at 10-4 before the Czechs found some momentum of their own and Bulgaria coach Abbondanza called a timeout at 11-8. But the Czechs were blowing hot and cold and found themselves six points behind at the second technical timeout before rallying to within a point at 17-16. Inevitably, another cold spell followed and the Czechs could only manage one more point in the set. A thumping drive from Vasileva brought setpoint and a setting error handed the put Bulgaria 2-1 up.

The Czechs came good again at the start of the fourth set and were four points up at the first TTO. Havlickova kept the pressure on the Bulgarians – who closed to within two on three occasions – and brought up setpoint at 24-21 with a good line drive. Bulgaria pulled a point back before Emiliya Nikolova planted a serve in the net and sent the match to a tiebreaker.

Two big hits by Filipova and a netted serve by Havlickova saw Bulgaria five points in front at the turnaround, and that proved too big a mountain to climb for the Czechs. They closed to within two at 10-8 but fell apart at the end. Havlickova hit a shot wide to give Bulgaria matchpoint and a block by Filipova on Kristyna Pastulova ended the match.