In-form Germany proved an impossible nut to crack for Thailand as the world No.8 stormed past the host side in comfortable straight sets 25-16 25-14 27-25 in their Pool L encounter of the FIVB World Grand Prix at the Hua Mark Indoor Stadium on Saturday. 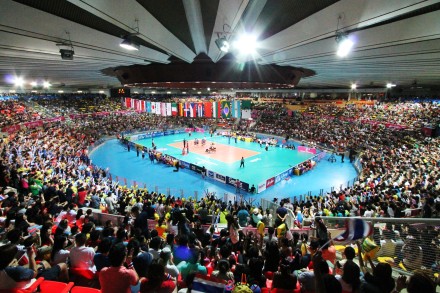 A large crowd of home audience packed the competing venue in this match. Thailand’s Malika Kanthong scored a match-high 12 points including 10 attacks from 37 attempts, while captain Margareta Kozuch led Germany with 18 points comprising 15 devastating spikes plus two blocks and one great serve.

Germany got off to a winning start in the opening set, with the 187cm-tall Margareta Kozuch unleashing a series of thundering cross-cross spikes to help her team take an initial 12-6 lead. The Germany’s blockings also worked out pretty well to foil most of the Thai attacking. Germany marched on their exceptional attacks to stretch the commanding lead to 24-15. The visitors allowed the world No.12 only one more point from the erratic serve by Denise Hanke to end the hosts’ challenge in the set 25-16.

Backed by loud cheering from over 7,000 home spectators, Thailand found their touch early in the second set to lead 8-7 initially before Germany started to produce the goods since then. The Germans mixed their splendid offensive combination of Margareta Kozuch’s spectacular attacks and scintillating blockings to close the gap 8-8. As Thailand could not maintain their momentum and became more prone with unforced attacking mistakes, Germany continued their winning streak to capture the set 25-14.

Conceding two sets, Thailand came all-out in the third set. Putting in a gutsy display, the Thais came whiskers of winning the set when they tied 24-24. However, their form in the final assault was still far from impressive as they made two straight unforced serves plus an erratic net play. Germany won the thrilling hard-fought set 27-25 and the match.