Russia registered six victories in a row in the FIVB Volleyball World Grand Prix after pulling off a straight set victory 3-0 (25-8 25-16 25-19) against Puerto Rico in their Pool L clash at the Hua Mark Indoor Stadium on Saturday. 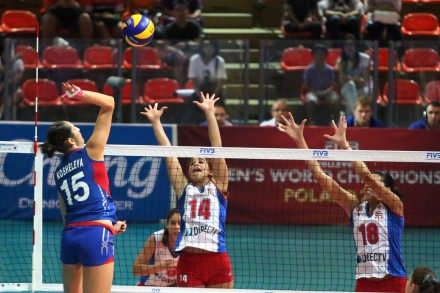 Russia currently stands in ninth place in the World Grand Prix rankings and will need to secure another win on Sunday to keep its hopes alive for the Finals. Puerto Rico has no chance to make the Finals, with no match wins in this year’s campaign.

Russia, No.6 in the FIVB World Ranking and reigning two-time world champion, struggled hard to beat world No.8 Germany in a grueling five-setter in the previous match on Friday. The former three-time World Grand Prix winners did not compete last year, but are pursuing their dreams of making the cut for the Finals in Sapporo, Japan from August 28 to September 1.

The towering Russians, with six players standing up to 190cm tall, include powerful Nataliya Goncharova and Tatiana Kosheleva who utilized their height advantage to attack and block effectively in the first set. Russia began the match with an effortless set 25-8.

Russia continued to command in the second set. Puerto Rico, led by hard-attacking Karina Ocasio, fought to make amends for the first-set loss. Still, the highly-skilled Russians proved too strong to go down securing the second 25-16.

Height remained the might of Russia in the third set. Russia strategically rested their best players, instead fielding several substitutes including Natalia Malykh and Alexandra Pasynkova to lead Puerto Rico all the way. Despite putting up a strong challenge, the Puerto Ricans failed to make the grade. Russia continued their mighty attacks with impenetrable defence to capture the set 25-19 and the match.