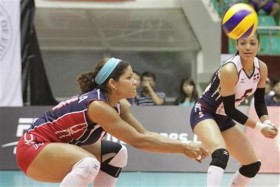 The Dominican Republic has recorded their most victories in one single World Grand Prix edition, with five wins. They recorded four wins in 2008.

Today’s match, which was the first meeting between the countries in the World Grand Prix, was one of the highest scoring matches, with 228 total points.

Italy plays World No. 7 Turkey on Sunday. The Dominican Republic will face Algeria, who have yet to win their first set in this year’s World Grand Prix and are last in the rankings.

The Dominican Republic’s Prisilla Rivera Brens stayed in the entire match to score 28 points for her team, along with captain Bethania De La Cruz, who scored 22.

Italy’s Valentina Diouf also scored a spectacular number of points in the match (29), but it was not enough to save her team, which now has six wins and two losses. Second best in the “azzurrina” team was Valentina Fiorin with 14 points.

For more news from this country, click on World Grand Prix 2013.