Undefeated China – who finished fifth in the 2012 FIVB Volleyball World Grand Prix – and World No. 9 Serbia are the first teams confirmed for this year’s Finals, along with hosts Japan. 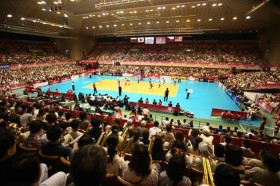 Seven teams still remain in the running to fill the remaining three Finals spots, which will all come down to the wire in the last day of the preliminary rounds on Sunday.

The USA, Brazil, Italy, Turkey, Bulgaria and Russia will all battle for the remaining three spots in the finals. Along with a definite win, teams will also need some luck to make the cut. Russia will need to win Sunday 3-0 and hope USA or Brazil loose by the same margin.

Brazil staged a straight-set victory against the Netherlands, 3-0 (25-15, 25-20, 25-15) on Saturday. Brazil competes against World No. 30 Kazakhstan on Sunday, in the final match of the last day of preliminary rounds.

In their second meeting in World Grand Prix this year, Turkey swept debutants Algeria in three sets (25-12, 25-12, 25-12). The win puts Turkey, who finished third in last year’s World Grand Prix tournament, in sixth place with 18 points – tied with Bulgaria. Turkey will need to win their match on Sunday against Italy to secure a place in the Finals.

Russia registered six victories in a row in the FIVB Volleyball World Grand Prix after pulling off a straight set victory 3-0 (25-8 25-16 25-19) against Puerto Rico on Saturday. Russia currently stands in ninth place in the World Grand Prix rankings and will need to secure a 3-0 win on Sunday against No. 13 Thailand to keep its hopes alive for the Finals. USA or Brazil will need to lose by 3-0 to open a spot in the Finals for Russia.

For more news from this competition click on World Grand Prix 2013.