The Netherlands close their bid in the 2013 FIVB Volleyball World Grand Prix with a 4-5 scorecard as they beat Cuba in straight sets, 25-13, 25-23, 25-22 Sunday Baluan Sholak Sport and Culture Palace. 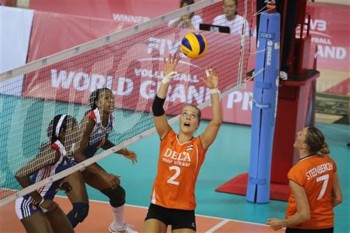 The Netherlands vs. Cuba

The Netherlands captain Maret Grothues starred in Sunday’s Pool K match with 12 attacks to boot. She was likewise a factor in the tough defence imposed against the opposing team.