The preliminary round of the World Grand Prix served up a real feast of world-class volleyball for fans all over the globe. It had shock wins and losses, featured one of the closest competitions in the history of the tournament and the drama lasted until the very last match. In the end, all the favourites, with the exception of World Champions Russia, progressed to the Finals that will take place in Sapporo (Japan) from August 28 to September 1: undefeated China, Olympic champions and record winners Brazil, European champions Serbia, defending champions USA, world number four Italy, and Olympic bronze medallists Japan. 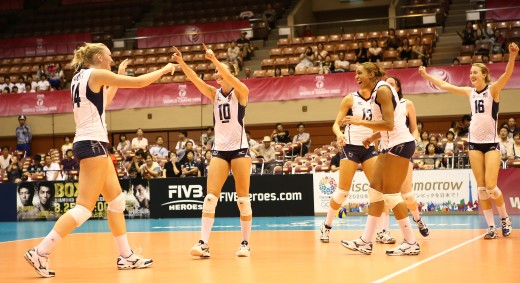 It was a tough competition for last year’s winners USA

However, with a record 20 teams involved in 90 matches in 15 venues around the world, each and every one of the finalists had to fight hard to earn their tickets to the Finals. Two figures in particular bear witness to how close the competition was in the preliminary round: 10 teams went into the final week still harbouring hopes of making it to the Finals, and 19 matches had to be decided in a tie-break after ending all-square in regular time.

“The standard was high in the preliminary round,” commented new US coach Karch Kiraly. “We had a difficult round, playing Brazil in Brazil, Serbia in Serbia and Japan in Japan, as well as other strong teams. I’m proud of every one of our 16 athletes. They all made contributions over the matches to do what we set out to do: to earn the right to play five more matches and stay in Japan for two more weeks.” His team’s incredible run of 18 wins in a row came to an end with a 3-1 defeat against Brazil.

Although Brazil and the US have dominated the tournament over the last three years (USA have taken the championship title each year since 2010), they faced some stiff competition from other teams this time round. The level of competition was reflected in their final positions in the preliminary table: Brazil finished runners-up while USA were down in fourth place.“We were really tested in a lot of the matches and had to step up our game. This preliminary round was the best possible advertisement for ladies’ volleyball,” said Brazil coach Ze Roberto.

The Olympic champions from South America suffered a shock defeat against Bulgaria. The World Grand Prix debutants were the preliminary round’s surprise package, also beating hosts Japan 3-0. However, they narrowly missed out on their first appearance in the Finals, losing 3-2 to the US in their final match. US coach Kiraly was full of praise for the newcomers saying, “They played a tremendous Grand Prix. They have an exciting future with many young players.”

Bulgaria’s exciting form was down in part to coach Marcello Abbondanza, who has put together a new volleyball power.“I have been very proud of my team throughout this entire World Grand Prix,” he said. “It’s our first time in the Grand Prix and our first time at the international level. We showed the power of our team in this Grand Prix.”

The preliminary round’s stand-out team was China, however. The team from the Far East, whose only previous World Grand Prix triumph came ten years ago, remains undefeated after the opening nine matches this year. The work put in by new star coach Lang Ping appears to be paying dividends. “There are still too many ups and downs in our games. We have to learn from our mistakes,” said Ping after the closing 3-2 victory over Serbia.

The European champions, Serbia also enjoyed an impressive preliminary round, with seven wins from nine matches – but coach Zoran Terzic was still not entirely happy. “We were not satisfied because we put many young players in the team and made many mistakes,” he said. “We hope we can progress in the future.”

Serbia are joined in the Finals by a second European team – as well as two from Asia, one from South America and one from North America – in the form of Italy. The Italians had to wait until the very last match to book their place in Japan. A hard-fought 3-2 win eventually brought an end to the hopes of a place at the finals for last year’s third-placed team, Turkey.

Thailand, fourth in 2012, and two-time Grand Prix winners Cuba also failed to finish in the top six this year. Surprisingly, the new-look Cuban team went the entire preliminary round without a single victory – as did newcomers Algeria, who are yet to win a set after the first appearance by an African team in the World Grand Prix. However, there was some consolation for Algeria’s coach Saidani Aimad Eddine: “We learned an awful lot.”

The same goes for three-time Grand Prix winners Russia, who were in their first year playing without former team leaders and world stars, Ekaterina Gamova and Lioubov Sokolova. Now coached by Yuri Marichev, the Russians did improve over the course of the tournament. But despite seven wins from nine matches, they narrowly missed out on qualifying for the finals. But with 184 points to her name, Nataliya Goncharova did help the team top the table as the highest-scoring player in one of the most exciting preliminary rounds ever.

Opposite complains about the call from the...