WCHJ M: Egypt victorious in a thrilling encounter with China

Egypt earned their first victory at the FIVB Volleyball Men's U21 World Championship in Turkey by upsetting the Asian powerhouse China in five thrilling sets. In Friday’s first Pool A match the squad from North Africa rejoiced after defeating their opponents by 3-2 (27-29, 25-23, 19-25, 26-24, 15-8) in almost two hours of play time. 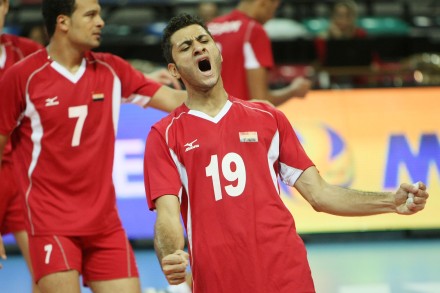 Mohamed Masoud became the hero of the first set. His prolific spiking and blocking gave Egypt the edge to claim it by 25-22. China stroke back in the second set. The Asian team established their total domination on the court. In the end the Africans fought back to score several points, but only upped their tally to 18 in this set.

The equilibrium in set three was maintained through 11-11. After that China broke away and never looked back to win it by 25-18. The score in the following set was kept level through the 19th point. In the conclusive moments the team around coach Gaber Abouzeid rose to the occasion and made a terrific run to finish it off at 25-21.

As if this was not enough, the tie-breaker turned out to be even more thrilling. After 4-4 Egypt took control, but China recovered at 11-11 and even reached a match point first. The African team kept their cool to eventually triumph victorious at 18-16.

China’s Tingwei Yan was the top scorer of the match with 26 points. Mohamed Masoud was Egypt’s most prolific player with 23 points, five of which from blocking.

SRB M: The trophy is staying in...