France recovered in the right time to cruise past Canada in epic five setter 3-2 (22-25, 25-21, 25-15, 23-25, 15- ) in the second round (Round of 16) of the FIVB Men's U21 World Championship at Ataturk Hall in Izmir, Turkey on Wednesday. With two hours of fighting between the two opponents the was going here and their till the French players came with all goods in the tiebreak to win the tough match and qualify for the quarterfinals in Ankara, while Canada will stay in Izmir to play for classification matches 9 to 16. 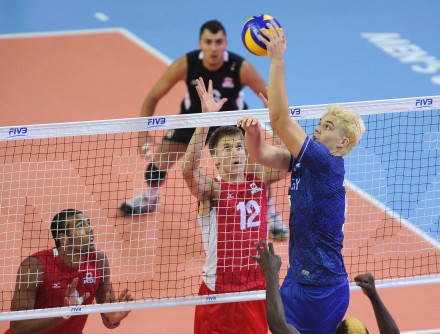 France’s Antoine Brizard trying to make a point against Canada

Canada took the match seriously since the beginning of the first set as they were arranged in reception and defence and use the service properly to stop the French attackers. Left- handed opposite spiker Bradley Gunter did well from positions 2 and allowed Canada to come ahead, while middle blocker Jimenez Demyanenko made also good action offensively and defensively and thus Canada won the set 25-22.

France showed they real team work starting from the second set they were more coordinated in attacks through the outside Trevor Clevenot and Thibault Rossard. French coach also substituted main middle blocker Gael Tranchot and fielded Kevin Rodriguez to improve the blocking and succeeded to lead throughout the second set till they won 25-21.

Again France was motivated to continue the same rhythm where they dominated the match through the service which put Canada team under pressure till they won widely 25-15 in the third set.

Canada team tried save the match as they came back strongly in the fourth set and started to use the quick attacks through the middle of the net to penetrate the French blockers. Canada coach also make some substitutions to refresh the team where he succeeded to come back and advance till they won the set 25-23 to extend the match to tiebreak.

France team played their best in the tiebreak using the spike service of Thibault to lead 4-1 before they turned court at 8-4. It was easy for the French team to continue the same rhythm although some resistance from Canadian team and win 15-10.