ECH W: Netherlands in next round, Spain goes home

After two five set thriller defeats, the Netherlands celebrate their first victory at the 2013 CEV Volleyball European Championship – Women with a straight 3:0 (25-16, 25-14, 25-18) win over the winless team from Spain. Therefore the team of head coach Guido Vermeulen booked their ticket for next round and will play also in Halle/Westphalia against the ranked third Team of Pool C on Tuesday. 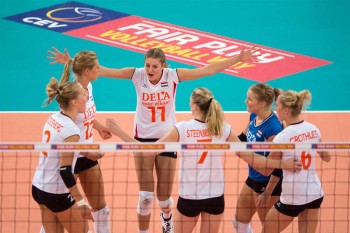 Compared to the first two games, Spain fought bravely and surprised the defense of the Netherlands time and again. However, their opponents increased their performance in the attack (63 %) and wrapped up the result at 25-16 in first set.

Things didn’t change in the second set. The Netherlands dominated their opponents in all aspects of the game. An unforced error of Milagros Collar brought up the first set point, Anne Buijs ended it at 25-14.

Spain revealed a little surprise and led 7-3 at the beginning from the third set. It seemed that the Girls from Netherlands were unfocussed at this time. But Gido Vermeulen found the right words in the technical time-out, because his girls cut the distance to one point (10-11) and took the leadership only two rallies later (12-11). From now the Spanish Team could not deal with the power of the Netherlands and had to accept their defeat for the third time (25-18) 2013 CEV Volleyball European Championship – Women.