Serbia, defending European champion, passed into the semifinals after straight win against Italy 3-0 (25-14, 28-26, 25-18) in Hallenstadion in Zurich. 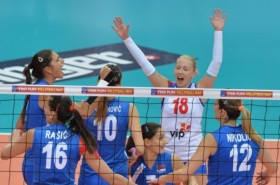 Serbia has played in the first set like in a trance. Ladies led by Zoran Terzić were great on the block where Milena Rašić was dominant, while in the attack Jovana Brakočević bombed the Italians. The movement of the result suggests that Serbia was inspired (9-0, 13-2, 21-8). Italy has showed teeth only in the finish of the set, but not enough to get closer to the opponent – 25-14

In the second set, a great struggle was conducted. Italy had better opening, leading 5-1 and showing that they had forgotten last set. Terzić was forced to ask for a time-out which yielded results because Serbia has made a 4-1 run and got closer to 6-5. However, Italians had the initiative of the result for most of the set, constantly leading with two or three points of advantage. Following the lead of Italy of 21-19, Serbia tied at 21-21 and after that the game was point by point. At the Italians, Valentina Diouf did a great job, while Brižitka Molnar won some key points for Serbia, which won the set 28-28 after great drama and a lot of turnarounds.

Italians seemed to lose all their energy in the previous set, and they started very mildly the third, which Serbia used to lead 9-2. This gave wings to East Europeans, but after their 13-5 lead they were a bit relaxed. Italy made a 4-1 run but that was all from them in this quarterfinals. Serbia has made 15-11 lead with a 5-0 run, all in service of Milena Rašić who interrupted the Italian reception. Serbian counterattacks were in a row followed with a standing ovation from the crowd– 25-18.

For more photos from this match click on Galleries.

See the profiles of Serbia and Italy.

ECH W: We worked hard for this – said Pankova