SEOUL - Four South Korean volleyball players have been banned for life for their involvement in a match-fixing scandal, local media reported on Monday. 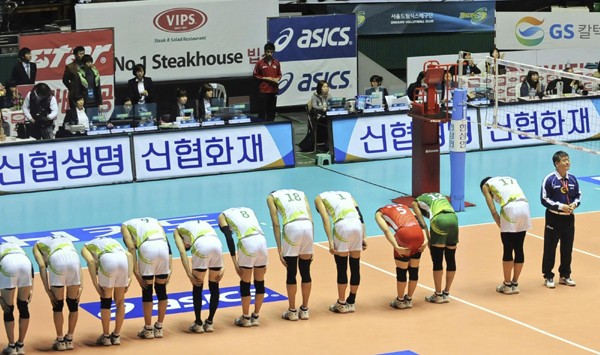 Volleyball players of Seoul Dream 6 bow to apologize for the recent volleyball match-fixing scandal before their match in Seoul, Feb 12, 2012

The disciplinary committee of the Korean Volleyball Federation has banned three players from the KEPCO 45 team and another from Sangmu, a military team in the V-League. None of the quartet are allowed to take up coaching assignments either, the Yonhap news agency reported.

“To make sure professional volleyball can remain in place in the country, we had no choice butto impose severe punishments,” Park Sang-seol, secretary general of the federation, wasquoted as saying.

“Some have been taken into custody, and some have not. But we’ve looked at what prosecutorshave learned so far and banned players for life.”

A fifth player, who admitted his involvement in the ring while representing his previous team Sangmu, remained suspended until the prosecutors finish a probe into the scandal which hasled to the exclusion of the military team for the remainder of the season.

Of the players interrogated for allegedly taking money from gambling brokers, three have been taken into custody.

South Korean soccer was thrown into a similar chaos last year due to a match-fixing scandal thatled to the arrest of nearly 50 players.

It was the worst scandal to hit the 29-year-old K-League, with a former coach and player, who Korean media linked to the match-fixing ring, found dead in separate incidents after suspectedsuicides.

South Korea: The most shameful period in volleyball history