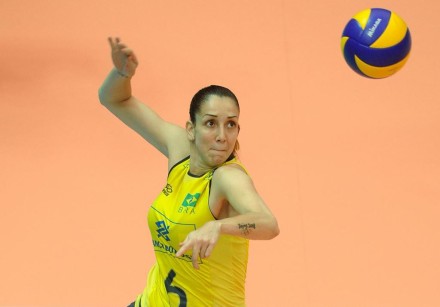 The winner of the competition will qualify for 2014 Women’s World Championship in Italy as well as the World Grand Champions Cup taking place in Japan this November. Championship favorites, Brazil top the leader board, followed by Peru with six points while Argentina has five.

Brazil defeat Colombia 3-0
Olympic champions, Brazil proved to be unstoppable as they defeated Colombia 3-0 (25-13, 25-14, 25-18) in 1h:06min. With the win Brazil claimed first place in the tournament on the second day of competition and are now one step closer to attaining their 18th South American title.
The top scorer of the match was Thaisa Meneses with 14 points, followed by Colombian Montaño Madelyne who scored 13 points.

Peru defeat Chile 3-0
The Peruvian Volleyball Team continued to make the home crowd proud as they beat Chile 3-0 (25-14, 25-20, 25-18) in 1h15min. The Peruvians so far maintained their second place in the tournament. With 12 points the Peruvian attacker Karla Ortiz was the top scorer, followed by Chile’s Lucia Lozano who scored 8 goals.
Check more news about this competition at South American Championship 2013 W.