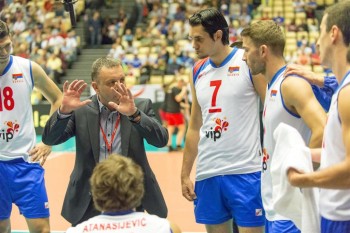 Serbia were in very strange situations, they had to do something to change their playing style. Kolaković has decided to bring in new players on court. Jovović, Ivović and Lisinac were the players who gave the new energy to Serbian team.

In next two sets, Serbia succeeded to tie a game on 2:2.

In tie break, Serbs continued to play well and clinched first win at the European Championship 2013.

Aleksandar Atanasijević was the best scorer in Serbia with 23, while Miloš Nikić had 13, and Marko Ivović finished with 11. In Netherlands, Jelte MaaN and Niels Klapwijk both had 14 points.

For more photos, see the gallery below!