ECH M: Atanasijević – “Beast is most dangerous when it’s close to dying”

Serbian opposite Aleksandar Atanasijević, who scored 23 points against Netherlands, has agreed that Marko Ivović was the key player in yesterday’s game: 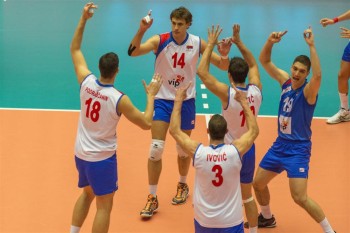 “We played really bad against Slovenia and felt a big pressure yesterday because we knew we had to play good to beat the Netherlands. The first two sets were the worst two sets in our 5 months build up to the Championships but when Ivović came to the court everything changed. We started to fight for every ball and this is the key to how we should play the next match and to defend our title from two years ago. The beast is most dangerous when it’s close to dying and we were like this today. Now we re-start the European Championship and we will fight for every ball”.

“It’s like we played two different matches in one match, winning 2-0 and losing 3-0. Serbia were very insecure in the first sets searching for their level and we controlled the match. We could not keep our level and they turned it around with some substitutions. We were not consistent enough, it wasn’t bad but in the end it was not good enough. We made too many mistakes but we are motivated and we will be ready to play well tomorrow and I hope it is enough to beat Slovenia”.

ECH M: Andrea Anastasi – “Match against Slovakia is crucial for us”