Beograd, Serbia, February 20, 2012. The ladies of Crvena Zvezda BEOGRAD seized this past weekend Serbia's national cup for the fifteenth time in history after downing NIS Spartak SUBOTICA in straight sets in the final (25-21, 25-20, 25-13). 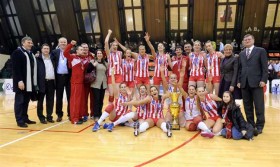 The game was played at “Kolubara” sports hall in Lazarevac, with international candidate Stanislava Simic as first referee supported by Vladimir Simonovic as second referee.

Crvena Zvezda and Spartak had previously edged Vizura BEOGRAD and the home heroines of Kolubara LAZAREVAC in the semifinals played on Saturday.

The girls of “Red Star” are about to re-start their European campaign in the Challenge Round of the 2012 CEV Volleyball Cup by testing out there the likes of Galatasaray ISTANBUL.

Mr. Nemanja Simovic, Member of the City Council for Sports, Youth and Tourism of the city of Subotica, presented the team captain of Spartak, Danica Radenkovic, with a special plate to commemorate the second place achieved by her side.

Special medals were handed over to all officials involved in the final by the Secretary General of the Volleyball Federation of Serbia and ESOC member, Mr. Slobodan Milosevic.