Dominican Republic’s Jose Caceres became the first player ever to register a 30-point performance twice in a single match in the history of the NORCECA Men’s Continental Championship. 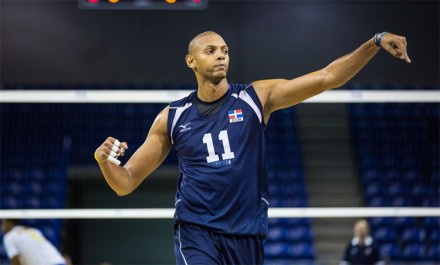 Caceres poured 31 points in the loss of Dominican Republic to Cuba in five sets Thursday night in the quarterfinals of the biennial competition.

The news was served by Roosevelt Comarazamy, Communications Director of NORCECA from the confederation headquarters in Santo Domingo.

Nicknamed “Little Nail” (El Clavito), the 6-11 feet Caceres established the all-time record for the event when he fired 37 points against Mexico on October 17, 2009. The prolific scorer Caceres also holds the single-match record of the Men’s Pan American Cup with 37 points against Puerto Rico on June 6, 2009.

Five players have reached the 30-point plateau in the tournament since the rally-point rule was established and the Volleyball Informative System (VIS) was implemented beginning in 2001.

Second in the list is Barbados’s Elwyn Oxley, who totaled 32 points also against Mexico on September 20, 2007.

Manzo had his big game against Dominican Republic in the same match Caceres set the all-time record while Leon produced his offensive barrage on September 3, 2011 against the United States.

Mexico’s Ivan Contreras complete the list of members of the exclusive club with his 30-point production against Puerto Rico on September 28, 2003.