Venezuela claimed their second win at the Men's U23 World Championship with a 3-1 (21-17, 21-12, 16-21, 21-15) victory against Mexico on day four of competition at the Arena Presidente Tancredo Neves. A day after getting their first win of the tournament against Australia, Venezuela added a second against Mexico and their final pool match against Iran will now decide who finishes third in pool B. 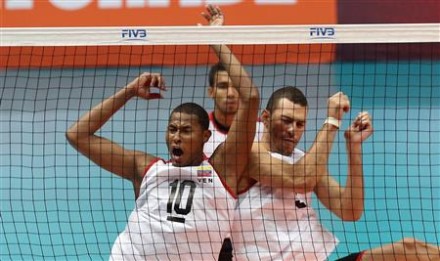 In a close first set, Venezuela had the slight advantage and thanks to wing spiker Jhoser Contreras (6) and captain Kervin Martin Pinerua Urbina (5) were able to take the set 21-17.

Venezuela controlled the second set, getting their net defence in order and earning five blocking points for the set, thanks largely to the efforts of middle blocker Emerson Rodriguez. Mexico were five behind at the technical timeout and eventually lost the set 21-12.

Errors dominated the third set, Mexico’s number went down and Venezuela’s went up as they conceded nine points on errors compared to a combined total of six from the previous two sets. Mexico’s top scorer Roberto Rincon inspired his team to their first set of the tournament 21-16.

Venezuela got ahead at the start of the fourth set, but Rincon’s spikes pulled Mexico back only for serve mistakes to surrender momentum back for Venezuela to lead 12-8 at the technical timeout. Mexico were unable to respond with consistency and Venezuela took the set 21-15 and the match 3-1.

Venezuela’s blocking game produced 12 points, while captain Pinerua Urbina was the match’s top scorer with 19. Despite being on the losing team, Mexico’s Rincon earned his highest points total (17) of the tournament.

After Thursday’s rest day, it’s the final round of pool matches with Venezuela playing Iran for third place in pool B, while Mexico face the group’s other winless team Australia.