Asian club champions Guangdong Evergrande from China outclassed Kenya Prisons 3:0 (25-14, 25-11, 25-13) in their first duel at 2013 Women’s Club World Championship in Zurich, Switzerland. The African champions could not deal with the speed and power the Asian stars displayed. Guangdong Evergrande set the pace with their sharp serves and consistent offense. 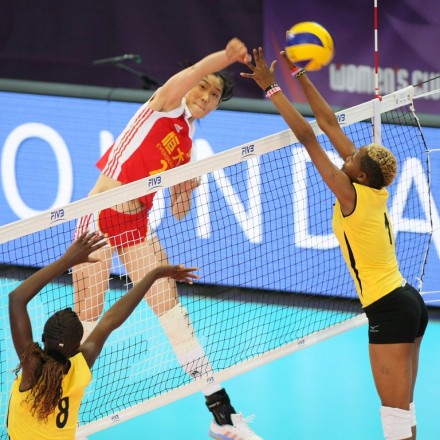 Ting Zhu was the top scorer of the match with 14 points. Captain Ruoqi Hui and Megan Hodge helped her side with 12 kills each. Everlyne Makuto booked 12 points for Kenya Prisons.

The Africans committed 18 errors while Evergrande had only five. The Asians added seven aces and six block winners to their records.

The Asians jumped out for a 16-9 lead in the middle of the first set. However, Lang Ping’s players experienced more difficulties as expected to stop the powerful Kenyan hitters at the start of the match. Especially Mercy Moim and Everlyne Makuto repeatedly found gaps in Evergrande’s defence. “Many of my players just came back from national teams activities, we’ll need time to find our rhythm”, said coach Lang Ping before the match. Nevertheless, the Asians were the better team. US-national team player Megan Hodge secured her squad a 25-14 set win with two remarkable hammers through the African defence.

Kenya Prisons still struggled with passing early in the second set. Coach David Mutsami called his ladies off court at 0-5, but it visibly did not help. At the second technical break, the Chinese already led 16-6. The sharp Asian serves caused major problems for a regular build-up on Kenya’s side, giving setter Jane Wairimu a hard time. The best outside hitter from 2013 FIVB World Grand Prix, Zhu Ting, led her team to an undisputed 25-11 set win.

The story of the match did not change in the third and last set. The Kenyan did their utmost but could not prevent the favourites from China to pull through. After one hour, Mercy Moim hammered long to offer Guangdong Evergrande the third set 25-13 and the match 3:0.

To read more information about this competition click on Club World Championship 2013 W.