By the guidance of coach Serniotti, Trentino overcame the odds and won the Italian Supercoppa by destroying Lube Macerata in straight sets. 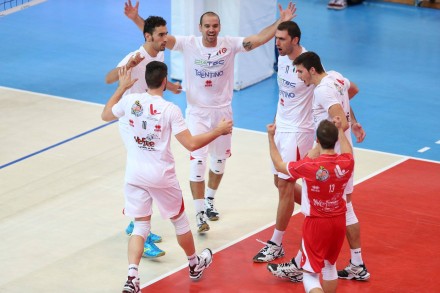 Fantastic first set of this years Supercoppa, went Trentino’s way. After an early lead of Lube Macerata, Giuliani’s boys started to slow down as Trentino was pumping up their energy. Both teams entered late stage of the first set on an even terms. Then couple of amazing Ferreira’s services got the two point difference for Trentino. Score was tumbling back and fourth, but at the end, terrific plays in block (Sokolov, Birarelli) gave Trentino 1-0 lead 25-23.

Coming into this match Trentino was heavy outsider but they’ve showed much, much more than that. Giuliani shuffled up many players in the second set but none of them was able to contain fired up Trentino squad. Tsvetan Sokolov was unstoppable and propelled Trentino to an even bigger lead of 2-0 (25-23).

Lube finally started playing in the third period. They’ve led by four points midway trough the set but couldn’t cope with energy of Trentino. Their defence was extraordinary during entire match and with every player on Trentino squad playing at such a high level, Lube couldn’t do anything but lose 3-0 (25-21).