After claiming another victory in the Serbian Superleague, Crvena Zvezda BEOGRAD is set to travel to Italy for the second round of the prelims in the 2014 CEV DenizBank Volleyball Champions League to play Italy’s champions RebecchiNMeccanica PIACENZA on Thursday, October 31. 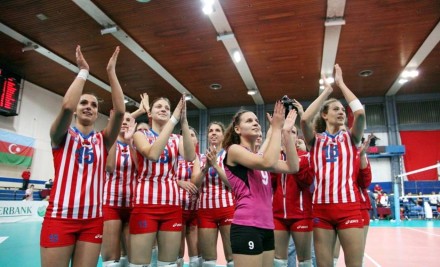 Crvena Zvezda lost in straight sets to Igtisadchi BAKU their first game in Pool B but they could display a good performance. This opinion is shared by libero Teodora Pušić who says:

“Last week we relaxed in the third set and played better but I think that throughout the match we have showed that we can play good volleyball and that we have the right quality and potential. Last season PIACENZA won Italy’s national league as well as their national cup. We will do our best and try to repeat what we have done in the third set of our game with Igtisadchi. In any case we hope for a good match.”

PIACENZA changed some players since last season but it still remains a very solid team: “We never played this team before and I really do not know them that well but I trust that our staff has worked on the right tactics and that they know what we are supposed to do in this game” Pušić concludes.