There are six teams with an immaculate record of three victories after the third round of prelim action in the 2014 CEV DenizBank Volleyball Champions League – Men was completed on Thursday evening. France’s TOURS VB, Russia’s Belogorie BELGOROD, Italy’s Diatec TRENTINO and Lube Banca Marche MACERATA, as well as Halkbank ANKARA and Knack ROESELARE all top the charts of their respective groups waiting for the competition to resume in early December after the break due to the FIVB World Grand Champions Cup coming up later this month in Japan. 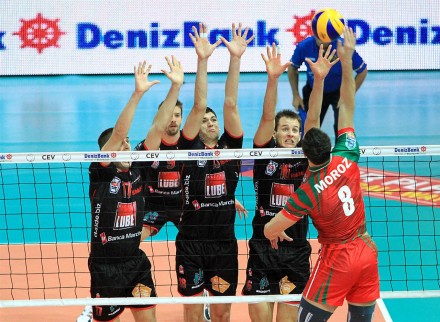 Russia’s champions Belogorie BELGOROD have simply routed their opponents in Pool B with three straight victories over Noliko MAASEIK, Olympiacos PIRAEUS and – more recently – VK OSTRAVA to leave their mark in the prelims of Europe’s elite competition right from the go. This series of great performances confirms what their mentor Gennady Shipulin had stated shortly before the start of the season, as he stressed the CEV Volleyball Champions League was the main goal he had set for the 2013/2014 campaign of his star-studded team.

France’s TOURS VB followed up on last week’s home victory over Italy’s vice-champions Copra Elior PIACENZA with an away win in Slovenia where the players captained by Czech opposite David Konecny played another superb game to edge hosts ACH Volley LJUBLJANA to cement their leadership in Pool A.

Though their roster has undergone many changes this summer, Diatec TRENTINO still looks very competitive and on Wednesday cruised to a third straight victory as well, this time routing Turkey’s Arkas IZMIR in straight sets at the Atatürk sports hall.

The most anticipated game of the week did actually take place in Italy where Lube Banca Marche MACERATA and the winners of the 2013 edition, Lokomotiv NOVOSIBIRSK (see picture), crossed their ways in the third round of play for what Volleyball fans have dubbed the “group of death”, Pool E. With another solid performance, MACERATA could cruise past a second Russian giant – they had already stunned Zenit KAZAN in the first round of play – to keep first place in a group where the battle for a spot in the Playoffs 12 is expected to be very close up to the end of the prelims.

Halkbank ANKARA and their many stars – Osmany Juantorena, Matey Kaziyski and Raphael Vieira de Oliveira to name only a few – also cashed their third victory in the competition after travelling to Austria to cruise past Hypo Tirol at the Olympic stadium in Innsbruck and cement their supremacy in Pool F.

Knack ROESELARE is the side that tops the tables in Pool G after their sensational home victory from this past Tuesday over Poland’s Zaksa KEDZIERZYN-KOZLE, the team that had finished last year’s edition in fourth place. Knack head coach Emile Rousseaux was evidently delighted with what his players have accomplished so far: “My players keep surprising me” he said after the home victory over Zaksa. “It is my job to prepare the game as good as possible from a tactical point of view but my players eventually decide about the outcome of the match. They did a great job tonight and I am very proud of them.”

POL M: Zaksa barely got the win in Bydgoszcz

BUL M: What does Sokolov dream of?