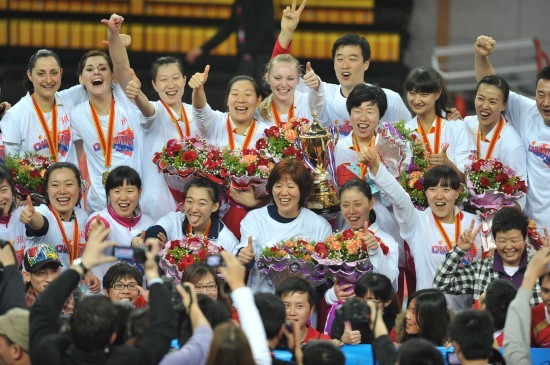 In the second match of the finals, the eye-catching performance of Skowronska and Costagrande with their powerful jump serves, spikes and blocks impressed the local volleyball fans.

“Kasia and Carolina contributed greatly in helping us to win our first ever Chinese women’s national league title and played an important role not only in attacking but also in defence,” Lang said.

“I would like to give special praise to Caroline. She is an all-round player. She always managed to help the team to extricate itself from a difficult position with her strong spiking, especially at crucial moments in the match. She is absolutely the MVP of our team.“

Skowronska collected 29 points in the first match and 27 in the second while Costagrande took 20 and 22 respectively.

Costagrande said after the match: ”We played an exciting match for our fans. We felt a bit nervous as we are very eager to win the championship and I am very happy that I realized my dream together with my teammates. This is the first but not the last title for Evergrande.”

Skowronska added: “Today’s match was very hard and difficult. It was not easy for us to win the game. Everyone has tried their utmost and the title is a great reward for us.”

Established in April 2009, the Evergrande Women’s Volleyball Club is different from the other mainly local government-funded teams and is the first fully professionalized volleyball club in the country. It is managed and operated completely based on a business model. The new mode of assuming sole responsibility for its own profits and losses, independent survival, and self development was beneficial for the construction of professional Chinese volleyball.

Lang, who led China and the US to Olympic silver medals as well as coaching in the Italian and Turkish leagues, said big corporate investments, like Evergrande’s, could lead to a more professional league, which would then provide the base for a stronger national squad.

ITA A1: Coach Bagnoli: “Victory we wanted and deserved”

Countdown has started in London, only four...