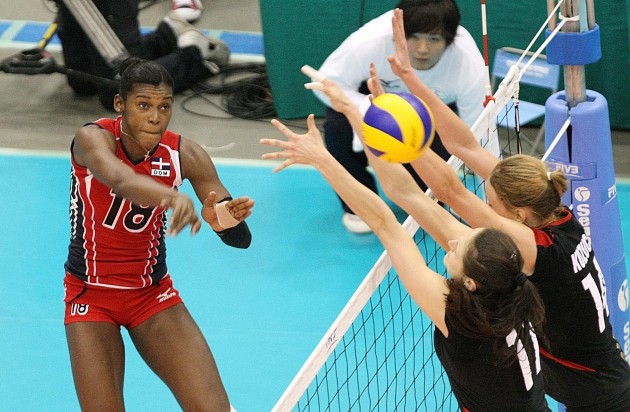 Twice this season the 24-year-old has surpassed the 50-point mark in the Japanese V Premier League. She first amassed 51 points in a victory over JT Marvelous on January 29 before one week later scoring 54 points to carry her side to a five-set win over Hisamitsu Springs.

The 54-point job equaled the record number of points in a senior match by an individual player set in November last year by Colombia’s Madelayne Montaño while playing for KT&G Hungkuk in the Korea League.

The 24-year-old Dominican was the best scorer and best server in last year’s FIVB World Cup when she totaled a World Cup record 42 points in a victory of the Dominican Republic over Germany and finished the tournament with 228 points.

The record number of points in an international tournament is 53 set by Croatia’s Barbara Jelic in the 1999 Women’s European Championship semifinals.

De la Cruz is expected to play a key role for her Dominican Republic team in the NORCECA Women’s Olympic Qualifier Tournament to be held in Tijuana, Mexico from April 27 to May 6, where they will battle teams from Cuba, Canada, Costa Rica, Honduras, Mexico, Puerto Rico and Trinidad and Tobago for one berth in the 2012 London Olympic Games.

“We are counting heavily on her as a vital part of our offence for the upcoming Olympic qualifier,” Dominican Republic’s coach Marcos Kwiek said. “We feel very confident about our chances of reaching the London Games.”

The Dominican Republic took part in the Olympic Games for the first time in Athens in 2004 but failed to qualify for Beijing in 2008.