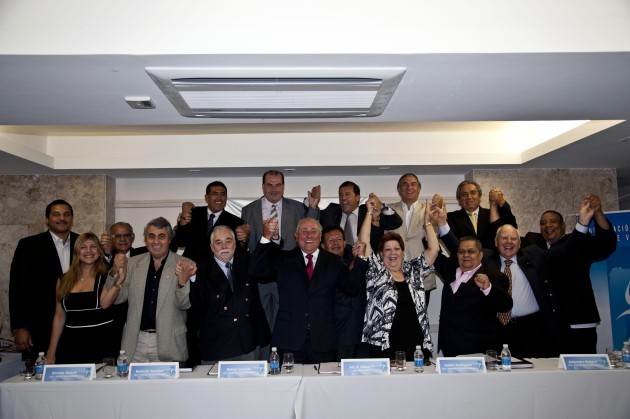 The CSV president Dr. Ary Graça informed the delegates the excellent situation South America Volleyball finds itself in: “2011 was the most important year for the CSV,” he said. “The continent welcomed three of the four grass-root World Championships.  Once more we were capable of carrying out events showing great organization and quality. The Confederation organised tournaments that were held for the first time: the Girls’ U 16 South American Championship in Uruguay and the Boys’ U 17 South American Championship in Ecuador.  And we received many compliments from coaches participating in those competitions”.

The CSV also broke a record organizing last year 10 volleyball events and 11 beach volleyball tournaments across the continent, whilst participating also in 12 competitions organised outside of it.

There was not only great investment in the federations to organize the championships but with support like sending technical staff, coaches and even hiring coaches to participate at different events in the countries that belong to the confederation and doing VIS Courses, volleyball grew in the continent steadily.

Since the new formula (Continental Cup) for the Olympic qualification process was presented by the FIVB, president Graça has watched a great improvement in the technical and organizational aspects in beach volleyball all over South America.

“The CSV will go on supporting beach volleyball because it is the shortest possible path for the poorest countries to get involved in international volleyball. The FIVB proposal helped 142 countries to play beach volleyball and participate in different international competitions. In Brazil, even my project was even more successful as 50 per cent of the Olympic and world champions come from poor areas of my country. We are a great country with severe contrasts between poor and rich and we cannot give privileges to one group over the other” Dr. Graça said pointing to his long experience as a former player and official.

“Paraguay, for example, has had tremendous development since hiring a Brazilian coach – former player Garrido – who has been replaced this year by another Brazilian coach, Pedro Paulo, that will take care of the senior and grass-root players, with the goal of increasing the activity of beach volleyball,” former president of the Paraguayan Volleyball Federation Roberto Escobar said.

The president of the Bolivian Volleyball Federation Ezequiel Machicado agreed: “The donation of travel tickets that allowed the participation of teams on the South American Beach Volleyball Tour motivated even more in the qualifying tournaments in the cities of La Paz, Cochabamba and Sucre. This policy allows poor countries like Bolivia to improve in their volleyball training. It is important to point out that in Bolivia we did not have any organized beach volleyball training and now we maintain steadily 10 women’s and 12 men’s teams”.

The same happened with Ecuador whose President Jorge Granja mentioned: “The support of the CSV was essential to
increase the number of participating teams by 80 per cent and the level of Ecuadorian athletes. As in volleyball, with the creation of the children category, we promoted the development of the sport in our country.”

The Resolutions of the CSV Executive Committee at the General Assembly were cheered with applause by the 11 present presidents among the 12 CSV affiliated federations. Among them is the annual volleyball calendar for the children championships – that gather girls’ teams up to 15 years old and boy’s up to 16 – and from the year 2013 together with NORCECA there will be a Club Championship providing one vacancy to the FIVB Club World Championships in Doha.