The Champion of Middle European League 2011/12 is Branik Maribor. 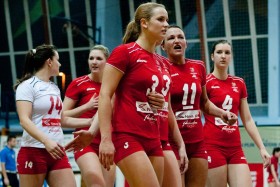 Slovenians defeated in the finals Multiversum SVS Post Schwechat with 3:0 (27:25, 25:23, 25:23). SVS Post had been considered a favorite before the Final Four. The bronze went to EU Slavia Bratislava.

The result was clear as the game progressed. No matter how hard SVS Post tried, Maribor Branik knew all the answers.
It confirmed the strong impression of the semifinal victory over Doprastav Bratislava.

For Slovenes, it is after 2010, the second triumph in the Central Europe League. For SVS Post for the fourth time it is only the silver medal.

SVS Post started the game quickly with powerful attacks and got to a comfortable seven – point lead. Then Maribor became much more stronger. SVS Post could not use 2 sets balls and Slovenians won the first set with 27:25.

In 2. set the lead changed several times and again Maribor was better at the end and defeated the opponent with 25:23.

In 3. set SVS Post took the lead of 8:3 to the first technical timeout. Maribor did not let SVS Post increase the difference of 22:17 and won the third set with 25:23.

“It is bitter when you lose three sets for 2 points. However, the result is right because Slovenes were braver players. As the MEVZA President, I congratulate to Maribor on the title” , said Karl Hanzl.