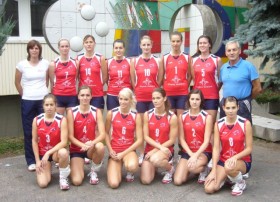 “We did not have a good team performance and played bad. We had played in the semifinals against Maribor Branik and did not play well and lost with 1:3″, said visibly disappointed Barbora Kosekova after the game.

The coach of the winning team, Martin Hamsik, spoke of the best game of his team: “Sticking – point won the third set. We have improved from game to game and are happy with bronze, especially because we have defeated local rivals.”