Coaches of the six teams participating in the FIVB Women's Grand Champions Cup had their game faces on when they met the media here on Monday night. 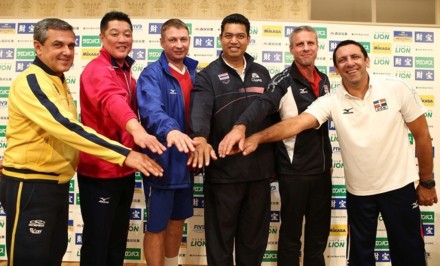 Coaches of the Competitors

Even though it is the final event of the year, it was apparent that each coach saw the value of participating in and trying to win the prestigious tournament, which gets under way at Nippon Gaishi Hall on Tuesday afternoon.

Brazil, the defending Olympic champion enters as the favorite and is seeking to become the first nation to claim the title at the event held once every four years for a second time.

The competition, which is being staged in Nagoya and Tokyo, will be televised to 127 countries around the world.

Japan.is automatically in as the host nation, and the Dominican Republic is in on a wild card as the continental vice champions with the best Olympic ranking.

Each team will play five games.