While Azerbaijan’s capital city is getting ready to host the final four of the 2012 CEV Volleyball Champions League – Women, the home heroines and 2011 club world champions of Rabita BAKU have successfully completed their campaign in the regular season of the local Superleague by downing their archrivals of Azerrail in three straight sets. 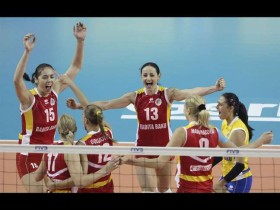 This game was extremely important not really for the standings but rather because the main stars of Azerbaijan’s Volleyball – Natalya Mammadova and Polina Rahimova – were testing out their skills while standing on different sides of the net.

Mammadova was finally on a class of her own and she anchored her team to a classy 3:0 win (25-21, 25-14, 25-23) to make sure Rabita ends the regular season on top of the charts. Actually the winners of the 2011 FIVB Club World Champs did not lose any single game since the start of the season, leaving to their opponents only two sets on their way to the Playoffs.

The second stage of the Superleague will start in early April and is joined by a total of five teams that will compete in a double round robin that, once completed, will determine the name of this year’s national champions.