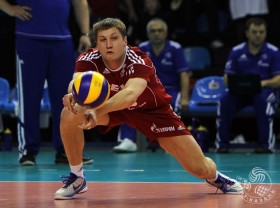 He spent two seasons in the second team, then was loaned to the team “Dinamo-Yantar”. Since 2010, Obmochaev protects color of the strongest club in the country.

As part of the “Zenit” Alex won the championship of Russia (2011),  two Super Cups (2010, 2011) and played twice in the Champions League final. Last Sunday Obmochaev won the most prestigious club tournament in Europe and was selected for the best libero of “Final Four” in Poland, which ended by triumph for Zenit.

– This individual award is more like advance for me – admits Obmochaev. – I know that I still need to work hard to become a good player.

It should be noted that in October, Alex made his debut in the national team of Russia and immediately won the World Cup . Obmochaev is one of the candidates for the trip to London for the Olympic tournament.