Though this is only her first appearance in the CEV DenizBank Volleyball Champions League, Ukrainian-born and Volero opposite Olesia Rykhliuk did immediately leave her mark on Europe’s elite competition. 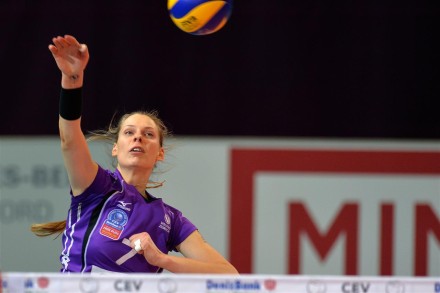 Rykhliuk is by far the top scorer of this year’s CEV DenizBank Volleyball Champions League – Women with 170 points so far, much more than those scored by the likes of Ekaterina Gamova, her countrywoman Nataliya Obmochaeva or Madelaynne Montano.

“Of course I always want to show a good performance but my main concern is that the team of Volero is successful. The focus is always on the results of our team, not really on individual performances.”

The 26-year old Rykhliuk is making her first appearance in the CEV DenizBank Volleyball Champions League, an experience she would like to share: “I think that this is the toughest and most competitive league in the world. Just as an example, this competition also features the likes of VakifBank ISTANBUL, i.e. the team that won gold at last year’s FIVB Club World Championship here in Zurich. Therefore I am very proud to be participating in this competition and of course it makes me really happy to be the top scorer so far.”

She moved to Volero Zurich for the 2013/2014 season after spending a few years in Korea. “That country offered me the possibility to collect many experiences. The Korean league did also have a very positive impact on my play and my skills. Of course, I had to adjust to a totally different culture and mentality but, at the same time, I could get to know many interesting people. As for Volero, this is definitely a top team where some excellent players could already showcase their skills and achieve good results. I am very proud to be a member of this group.”