After edging BERLIN Recycling Volleys in straight sets last week in Germany’s capital city, Russia’s Zenit KAZAN is waiting for the return game with Germany’s champions with the intention to seize the night once more so as to make the Playoffs 6 of the 2014 CEV DenizBank Volleyball Champions League – Men. 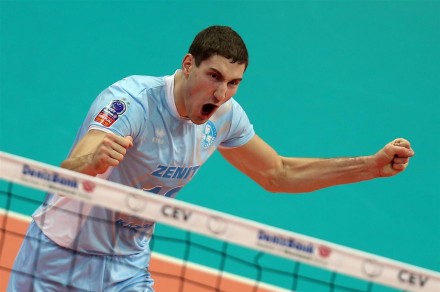 Waiting for the re-match with BERLIN, Zenit claimed their last game in the Russian Superleague edging their closest competitor, Dinamo KRASNODAR, in straight sets (25-20, 25-17, and 25-19) with a terrific performance in blocking (13 vs. 2). Maxim Mikhaylov – see picture – anchored Zenit KAZAN to the ninth straight victory for the side from Tatarstan in this year’s Superleague. This means Zenit has claimed the last 15 matches in a row by combining national league and European Cups.
As for BERLIN, Germany’s champions could prepare to take on Zenit playing their arch-rivals VfB FRIEDRICHSHAFEN but they lost that game in straight sets.

“Last year as we crossed our ways in the Playoffs 12 BERLIN made things quite difficult for us and in the end we won both matches at the tie-break” recalls Zenit wing-spiker Evgeny Sivozhelez. “After playing BERLIN last week in Germany we know what to expect. We served strong and our attacks were very good, so in the end we won in straight sets. However, this does not mean we can approach the return game totally relaxed” he continues.
“I really do not care about the fact that we just need to win two sets to make the Playoffs 6” adds Zenit KAZAN setter Nikola Grbic. “I do not want to play a golden set. We shall try to win and do this once more in straight sets as we did last week in Berlin.”