On Tuesday, Crvena Zvezda will be playing their home match in the 1/4 finals of the 2014 CEV Volleyball Challenge Cup, as they host France’s NANTES Rezé Métropole, a very experienced team with seven foreign-born players. 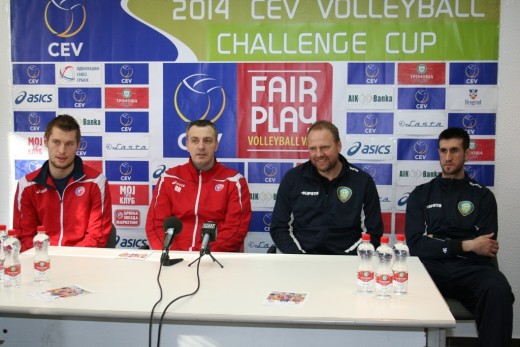 Though the task is not that easy, the young guys from Serbia’s capital city will be playing with glowing hearts to make a first step on their way to the semis.

“I am very happy that we have progressed to this stage of the competition” says Crvena Zvezda head coach Duško Nikolić. “We are now going to play a very strong team who is currently ranked fourth in the French national league. They have a very solid group of players and I would especially single out Iban Perez, who is also a member of Spain’s national team. The only thing that I expect is that we will be fighting to the end and that is the only way we can make the next round.”

“We have seen the game that Crvena Zvezda played against our compatriots of CHAUMONT VB 52” says the head coach of NANTES, Martin Demar. “They are very young but good. I expect that this first game here in Belgrade will be very difficult. Chances stand at 50-50, so we will see.”